“Writing and Writers in the Time of Trump”: Bookshop Santa Cruz Event

On Sept 17 I’ll be speaking on a panel with some marvelous writers at Bookshop Santa Cruz and if you are within hailing distance it would be wonderful to see you there.

At the bottom of this post is a link to the event, and also, here is the essay that originally inspired me to organize the event (and to write The Book of Dog!) : “Writing in the Age of Trump,” originally published on the inspirational and super-smart website, “Women Writers, Women’s Books.”

And because this is me being intellectual, rather than completely silly, here is this serious selfie of me listening to the smashingly fine climax of the opera Don Giovanni while standing in front of Rodin’s Gates of Hell…which is exactly right for my book, as you will know, once you have read it. 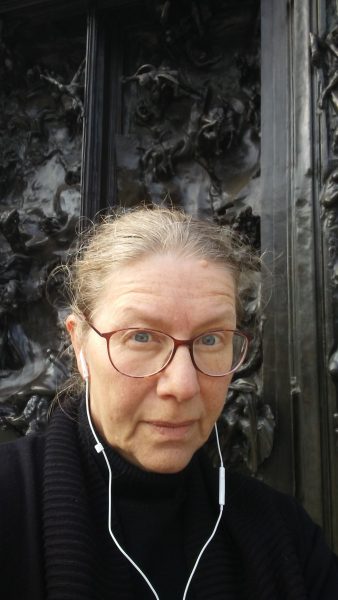 Writing in the Age of Trump

I want to tell you something surprising. I want to tell you how Donald Trump has changed my writing forever, and in wonderful, empowering ways. I will begin my story on the night of November 6 2016, just after the state of Pennsylvania had tipped for Trump. In that moment I experienced an overwhelming need to write down how it felt to witness Mr. Grab-em-Etcetera become Leader of the Free World. I wrote very fast. I stayed up all night. I was so angry. I had no idea that millions of women on election night felt the same way until we all showed up on January 18 the following year for The Women’s March, the largest worldwide demonstration in history.

What I wrote that night didn’t turn out to sound so angry when I looked at it the next morning. Instead it made me laugh. And this was the first sign of the motivating magical power of Donald Trump, Muse. What I wrote on election night in a fit of anger eventually became the fourth chapter of a new novel, The Book of Dog, a political satire that early reviewers are calling “uproarious,” “laugh out loud funny,” and “raucous fun.” How did it happen? It beats me.

Something about that shock of that night propelled me toward the healing force of humor, even though I had never written humor before.

As the novel began to take shape–very quickly, it turned out–I thought a lot about the many ways that, In unsettled political times, good satire can upend typical ways of thinking. I was excited to be writing some. You would think satire would be thriving just now. But it turns out that Trump’s election upended satire completely.

If you search online for “Satire in the Age of Trump” you will discover a trove of articles that contend that satire is now on life support. Comic impersonation and exaggeration and shock humor are the tools of modern satire, but they are the wrong tools when the President can out-shock the best of us. What good are insult-driven jabs, when Trump is the master of them? What good are jokes that demean and mock, when we elected a Mocker in Chief?

I’m not talking about censoring the message, by the way. It’s amazing the satirical lengths one can go to when speaking politely. Trump’s election had changed the map of what was funny, and what was not. I needed to use better diction. I needed to leave the salty Anglo-Saxon curse words for another time. I needed to write my outrage in the most elegant way possible. I needed to whisper it. I needed to re-read Voltaire. Did you know that Voltaire wrote a scene in Candide much like the scene in The Road by Cormac McCarthy? The one where humans are being stored as living meat to be consumed one piece at a time?

McCarthy made his scene revolting, and Voltaire made the same scene hilarious. After reading Voltaire’s scene I realized anything is acceptable, if you say it sweetly enough. And then I watched Charlie Chaplin’s The Great Dictatorand rediscovered how satire can do more than make you laugh, or feel superior. It can elevate and encourage. It can leave you hopeful instead of angry. Watch The Great Dictator and see for yourself, especially this scene.

Here’s the thing: it’s not only satire that has been upended by the Age of Trump. I honestly believe that language, and the way we use language as writers, has been fundamentally disrupted by the election of a man who has such an easy relationship with the truth. Something big and unmapped is happening to all kinds of writing these days–to language itself, both the way it is used to communicate, and the way it is used to dissemble. You may have discovered your writing has changed in response, no matter what your chosen genre.

These are the days that must happen to you, too, and to us all, as women and as writers: days when what is ‘fact’ or ‘fake’ changes with the flip of a digital dial; when #metoo truths are called “lies” by powerful men; when simple and innocent messages on a twitter feed can become tomorrow’s viral outrage. Language itself is under attack. Words seem less reasonable and predictable than ever before.

Lark Benobi began writing The Book of Dog on election night 2016, and drew inspiration for her story from the women who are speaking out, running for office, marching, and doing all they can to improve our world. Lark lives in Santa Cruz, California.

About THE BOOK OF DOG 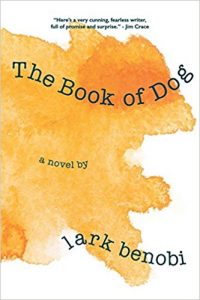 It’s the night of the Yellow Puff-Ball Mushroom Cloud and a mysterious yellow fog is making its way across America, sowing chaos in its path. Mt. Fuji has erupted. The Euphrates has run dry. The White House is under attack by giant bears, the President is missing, and the Vice President has turned into a Bichon Frise. It’s Apocalypse Time, my friends. Soon the Beast will rise. And six unlikely women will make the perilous journey to the Pit of Nethelem, where they will stop the Beast from fulfilling his evil purpose, or die trying.

The Book of Dog is a novel of startling originality: a tale of politics, religion, demon possession, motherhood, love, betrayal, and easygoing bestiality. A ridiculously plausible story set in a near-future America, it wryly explores how even the most insignificant and powerless of people, when working together, can change the world.

Writing and Writers in the Time of Trump